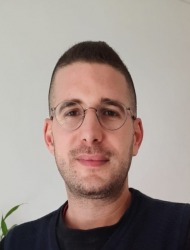 Nitzan
Faibish
Doctoral student, department of Political Science
Dissertation Project Title: Spontaneous interactions between individuals from conflicting groups in shared geographic areas in polarized cities
Supervisor: Prof. Dan Miodownik
nitzan.faibish@mail.huji.ac.il
This research addresses a main puzzle in the research of relationships between groups, and specifically the relationship between groups in a political-ethnic conflict: why, in some cases, interaction between individuals from different groups reduces the mutual sense of threat, while, in other cases, it increases the animosity and conflict. Even though the patterns of interaction between individuals from groups in a political-ethnic conflict within polarized cities get the attention of researchers from various disciplines for a few decades now, this question still remains an unsolved puzzle. This research intends to use a combination of methodologies, a natural experiment, alongside self-reporting and depth interviews, in order to put this question to the test. Also, and no less important, in order to offer conclusions about ways to reduce the mutual sense of threat and social distancing between groups in Israel as a whole, and in Jerusalem specifically.
Doctoral Students