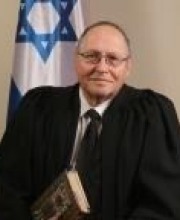 Professor in parallel track, Department of Political Science
elyrubinstein@mail.huji.ac.il
Elyakim Rubinstein (Hebrew: אליקים רובינשטיין‎, born June 13, 1947) is a former Vice President of the Supreme Court of Israel. Beforehand, he served as the Attorney General of Israel from 1997 to 2004. Rubinstein, a former Israeli diplomat and long-time civil servant, has had an influential role in that country's internal and external affairs, most notably in helping to shape its peace treaties with Egypt and Jordan.